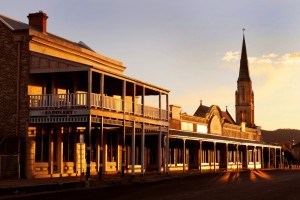 Did I tell you about Fitzy?

Years ago a bloke traveled up to Mudgee on some errand or other for the Boss. A stocktake, or an audit, or some blessed bookkeeping task that meant tension for the local girl lifting a few hundred here and there from payables.

Paying relatives for babysitting the children she never wanted, or paying for weekends down the road with just another fellow in a motel wallpapered in promises.

Gulgong had three pubs this weekend, and all of them locked up against the weather and Fenech on the fighter’s bill.

How we all loved that testy little bastard those days. Who of you have ever picked a fight with the wrong bloke and have tried to hold off a man who never ceased coming forward?

The pub was locked tight that night; the fire was banked up, the bar was settled, the proprietor was splashing rum into everyman’s glass and I was sat next to Fitzy.

In those days Gulgong had a place run by the Salvos that was suppose to be the redemption of whoever they netted in their street sweeps of Sydney.

Blasted away men with eyes like old raspberry jelly, stuttering old husks from wars peace and suburban famine; like Fitzy, stuck in here waiting for the fight, sitting next to me and the good lady.

He wore faded tattoos on both his forearms and the more we drank the quieter he became.

Fenech rumbled away above us and the bar noise swelled and receded as the rounds checked by and all he wanted to know was what catching waves was like, and standing up on moving water, and sliding away and down on the warm blue face of a long swell off a Queensland point.

Fitzy, lost to all his family, just another poor relic of manhood, appropriated to his deathbed in some windy dormitory well in advance of his final day, exorcised by the well meant prayers of saintly men and here we sit pissed and howling as Fenech punched his opponent to the canvas.

However he had got away from the confines of his home to enjoy this night has always defeated me, although he laughed away his escape then and threw his arm around me, if only because I could listen to his litany of errors without interrupting.

He was wearing a rotten old fox skin vest that night, all furried up and bald, something he had hunted up skinned and cured in his professional days, and he gave it to me.

That was thirty-five years ago.

Tags: fitzy, Larry
From: Mudgee, Works
← roundarm, trepiditious and fungry
the bookmaker from rabaul →
No comments yet