dexter and the champion 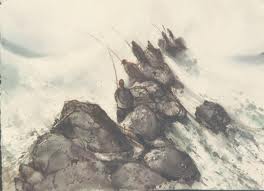 Dexter used to own a newspaper shop in Greenacre, NSW. The champion is a plumber, he still accepts work if it’s within ten miles of Skennars head which is where both of these fellows live. Same street. Lovely place Skennars head, full of nice homes but the only place to have a punt on good coffee is Lennox, which is not known for it.

Both of these men are about sixty plus, plus they both have balloon bellies, stick legs, no wind and so much good fortune they should buy lottery tickets every time they pass a shop that sells them. Because they were lucky today.

There’s a low grassy headland that overlooks Boulder Beach and next south is a rocky little bay full of killer shifting peaks in today’s four-foot easterly swell. Separating the two places is a low rock base that sticks out about three hundred feet into the sea, not sandstone but some kind of jagged combination of million year-old lava solidified into sharp edges and hard-cornered rocks that move when you tread on them. Right at the seaward tip of the ledge someone has cemented in a post. This is what fishermen hang onto when the waves sweep over them, fisherman, because there’s only enough room for one.

This is what a man grabs when the wave is on him and he can’t get back in time, once you’re in the water on a big day down here you are in for a terrible scraping. It’s been a merciless end for some. And you know they are in trouble when they toss their rods away and grab the peg with both arms. Watching isn’t easy.

Dexter had a white plastic bucket, the champion was using a walking stick. They were making their way out to a small dip on the ledge about ten feet from the peg, these two fat out of whack luderick fishermen, both heading out there for a half bucket of sea-cabbage. Hobbling and tipping and half falling over each other as they scrabbled and toppled their slow tortured path across the ^ sharp edges etc. It was a tragic sight. Shakespeare would have lit right up.

Ever lost your balance trying to step from one wet rock to another and then have to do a little hurry-up to get it right? Picture these two boofheads then. Watching them change ends on a bowling green you’d worry.

Now they’re doing a stretch of standard rock-hopping, and with a bit of sea already starting to wash through and around the peg, and about fifty feet still to go to get to the cabbage patch, and even more sea over there because it’s lower – so a man is checking his phone batteries, and wondering where the chopper will land up here. Figures an ambulance from Ballina will take half an hour from the call. This was supposed to be a quiet smoke and a bit of a think afternoon. But now here’s drama.

They’re almost out on the tip now, and neither of them is looking out to sea. The champion has his arse to the east, he’s bent over, busy with the sea-cabbage. Dexter is looking at some windy blonde about thirty feet away, she’s back where it’s safe and in some kind of horizon-fed trance – she’s at one with the elements, you can tell. Probably from Leicestershire.

I’m on the headland and at least one of these two old fools should be looking out the back, because here come the sets.

Their car is a bucket ute, big flash Ford with rod holders on the bars. Dexter is breaking out the rods and the champ has gone for a piss somewhere. A bloke wanders over.

‘ You’ve never ridden a surfboard have you.’

This wasn’t a question.

Dexter looks up, he’s a big bloke with a pug’s flat face and whothefuckareyou in his eyes.

‘You want to know how I know that?’

‘Because you don’t look out the fucking back, mate.’

Said with heat, said with intent. Fools like those two sometimes need rescuers. And sometimes the rescuers die instead.

with a nod to blindboy

Tags: blindboy, boulder beach, Lennox Head, out the back, ralph hulett, rock fishermen, sea cabbage, skennars head, striped luderick, the fishermans peg
From: Byron bay, Works
← the gentleman at the next table
coping with a hit from the falcon →
2 Comments Post a comment