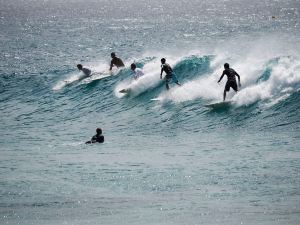 The Quiksilver’s comp is on Fuel today. Everybody is there. Heats on all day one after the other and everyone’s mixed up for the showcase.

Every heat is a feature act, and today they run out of the tent like bullfighters in a cow paddock, do the pros – anointed as such – for now.

All these supreme individualists iconised down into red green and yellow, or blue – whatever.

They talk and talk and whoop and exclaim do these lads on the commentary, as excited as girls, unbelievably so as Green in heat 6 does a perpendicular stabbing upthrust on a gently collapsing old washup wave that was lucky to get past the Ballina bar.

All the rides are imperfect, hands touch water, rails grab too deep, arms wave about like flags.