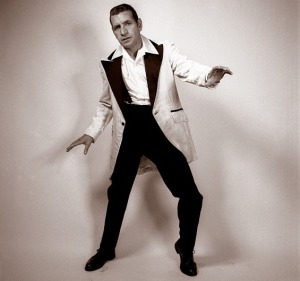 Tweed Heads, yesterday – the long bank almost ok and about one thousand are out there fighting for a line.

I’m on a verandah fourteen stories up and the rum is doing all the work. Wet out there on the water and cyclonic windy – offshore, getting dark.

The afternoon floorshow is all done and next up is a babe with spangled shorts and a violin, plus a guitarist and a drummer. Rock and Roll. Another rum. Please.

So many old men sitting here alone in the big room.

There are fifteen screens about the auditorium silently flickering away as some big-shouldered fellow takes a seat in front of where I’m sitting and he starts to bounce around there – in his seat – bobabobabob – this is a seriously overlarge unit and he’s bopping to the music like he has a jumping disease. Then he LEAPS out of his seat and RUNS to the dance floor and starts to JIVE to the music.

Just him on the floor. All alone. Bopping and bouncing and skipping and grooving – song after song after song. Two feet away from the legs in sparkle shorts, long legs, pink in the spotlight. Nice. Meanwhile our lad is looking more berserk the longer you look at him.

Time for another rum and here’s this old fellow looking on, just like me, and so I ask him what the fuck is all this and he just smiles at me and says that he was a drummer in a rock and roll band in 1967. Plus this fellow on the floor has some outstanding moves.

So I ask him. Just a test, everyone is a bullshitter these days.

Who do you reckon on being the best drummer around in your time?

I cop a look, then a half-smile, then he says Ginger Baker.

The people you meet.

Later I braced the dancing man and asked him where his inhibitions hid. In the Martial Arts class he said, training to kill the three guys in front of you and the two guys behind. I’m training my sons to do the same.

This is just a workout. Gotta go now.