inertia and surf dr. guillaume barucq – how your jock itches 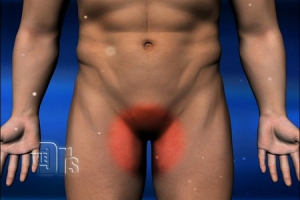 Guillaume Barucq is a 35-year-old surfer and doctor of medicine from France. Barucq works as a General Practitioner in Biarritz near the best surfing spots of the Basque Coast, and has published a study on surfing-related traumatology based on 350 patients admitted to the hospital after surfing accidents in the South West of France.

He would like to see more suffering surfers ribbed out in something a little more tight and shiny when they want to get rid of boardshort rash.

“Surf with a small and tight boardshort. At the moment, only a few Brazilian surfers dare to wear them, but it’s up to you to start a new surfing trend: surfing in speedos ” – That’s the good Doctor over here at Inertia. 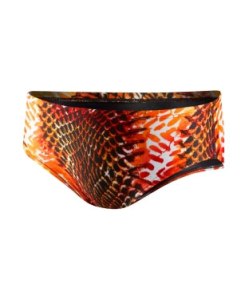 And this is what you should be wearing if you are a trend-setting surfer with severe jock itch, according to Doc Guillaume  – this red hot little number that so saucily  mimics the heat and irritation suggestively contained within its lurid fabric.

This is how it happens  –  a bloke (like Ron) comes down with severe case of groin rot and after about two days of tearing and ripping at the itch he comes by the Doc’s article. Inertia has many readers.

Ron takes the professional advice on offer, buys the speedos, wears them down the beach – and goes surfing.

The subsequent complications that will confront Ron aren’t covered in Barucq’s treatment though. The two problems. Surfers look ridiculous without boardshorts because they all have  skinny white thighs, that’s one, and Ron the stupid bastard has massive red rashes all over the insides of his. Everybody is looking at his groin now. With horror.

.. and three  – the only time you ever see clobber like this on a bloke in this country is when he’s marching proudly and with honour at The Annual Gay and Lesbian Mardi Gras in Sydney. So thanksalot doc, thinks Ron, now everyone thinks I’m diseased and gay.

and there’s more … from the Doctor.

“To prevent rash, apply some Vaseline to protect affected and sensitive areas”

Ron’s good to go on this so here’s the early morning scenario at Dee Why Point. Everybody knows everybody in the carpark early in the morning, knows their cars – knows their routines – and on a good day they are all in a hurry to get out. Except for Ron over there in his car. Way over there where the kooks park. They can just see his head and shoulders in silhouette, and he’s doing something with his hands. Down low. 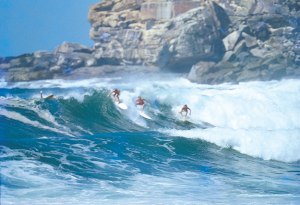 Then he steps out of his car wearing the saucy speedos.

It doesn’t matter what happens to Ron for the rest of his life now – he can join the army and do 25 tours of Afghanistan, whatever. The boys know better.