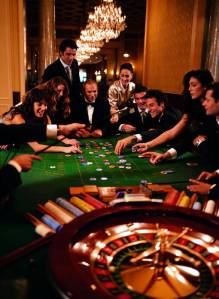 Jupiters has a couple of lads on station by their casino entranceways – men doing work not unlike the English secret servicemen who used man the sides of the incoming hallways at Gatwick Airport; the spotters with their photographic minds, men with the thin and blackeyed look of priests who only officiate at funerals.  They sought through the incoming passengers’ faces for anything familiar in Irish.

Thatcher the target those days. Brighton. These casino blokes were just looking for schoolkids and jittered up working girls.

So I tackled this guy 1st.

Wandered up to him and when he turned his big head on the big ball-bearings in his big neck I asked him if he could tell a loser from a winner as they exited his door.

This is when you look up at the scoreboard on a roulette table that gives the last 24 win numbers, all nicely illuminated, and you see that number 13 has been slotted by the pea five times in a row and there’s just enough time to throw the money chips on 13 before he closes game six because 13 is a lucky number.  The board says so.

– or, you watch the board for three hours and write them all down, the winning numbers – you get pencils and cards for that because they have seen you coming – and in the three watchful hours number 13 is the only one of the 36 on the layout that hasn’t been seen on the board once.  So that’s when you go bigtime with the stack of chips on 13, all that unluck means luck is imminent. And at 35:1

That’s the Gamblers Fallacy I said.

He may not have understood what I meant. So I went away.

Tackled the Roulette Floor Manager next. He’s the guy who patrols the nested roulette tables, he’s paid to spend a shift looking over the croupiers’ shoulders. Sometimes he stands on a low dais and taps away at stuff on his computer. Nothing is missed. Overhead at least seventy-five black half globes are blistered onto the ceiling just in case he does. More watchers in the rafters.

He does, and when he comes over to the rail I ask ‘ Why is it that you would share a roulette table with people you would never share a restaurant table with? ‘

This is after watching a couple of crowded tables for about three hours and seeing how the gamblers around them climb all over each other to get their chips down – it gets tactile on the baize and nobody wears name tags.

Inquisitive look. No blinks. Also no answer. Something buzzes and he walks away only to return a little later to say – well no, but whaddya mean?

So here comes the second in one ear and out the other explanation of the nature of things in Gold Coast casinos at three o’ clock in the morning.

In a restaurant everyone eats but the cook, in a casino the cook eats everything.

This is why James Packer is fat.

He may have not understood so I went away and sat at a vacant Texas hold ’em table looking at three gym ripped Kiwis playing baccarat over the way until the big one drinking Bundaberg rum with Wild Bull chasers left his seat and came right up close just to let me know that a thirty-eight year age difference didn’t mean he didn’t want to see some blood splashed somewhere tonight. All this without speaking.

There was a red-haired Vietnamese girl at the roulette table now and for the first time in my life I saw a womans’ eyes glitter.