how to get the girl. the australia day technique.

Generally speaking Australian men have always had a bit of a problem attracting their lady of choice, this is geophysical. The glory days when a bloke could roll up into the local dance half-shot and grab the nearest ranga* for a little intimacy are long gone. Almost long gone. There are pockets of resistance in this island girt by sea and Australia Day is their day.

Last year it was biff a Lebo, this year it’s grab a ranga. We wish.

Canberra is the capital of Australia. There is no surf in Canberra. They do have however The Canberra Australian Day Dance Festival for Singles and some of the old habits survive here. What follows may be distressing to some but in the interests of hard-line reporting we have decided to roll with the scoop in the hope that the unfortunate train of events depicted may be a lesson for the future, for the young.

< – –  This is Tone and Julso at the dance and as captured by our photographer. He’s (Tone) been there an hour, she’s just walked in and nobody is happy. Tone is a go-get kind of fellow and he sincerely wants just about everything Julso has, except her wardrobe and hair colour. We are reminded here of that unforgettable scene where Tony sees Maria for the first time in West Side Story. We can sense the same yearning here, the brave half-smile, the troubled brow.

Trouble here is that Julso seems to have given our man the total blow-by. Check the body english – she’s gone – but there is some love here. She knows, he knows, and he has a master plan.

The problem here  is that Tony sometimes comes in a little mob-handed at crucial times. He’s not about to slip her away out the back door and into the ute single-handed. Tone has asked a few mates to lend an assist here, just in case the lady has a change of mind on the way out. A bloke only gets one chance on Australia Day.

Pic (1). We re-join the couple as they make their exit from the function. Everyone is in a hurry. Everyone but Samson on the right. Samson is a local gentleman with impeccable credentials but a little too sun-tanned to get a ticket to the dance today.

He is seizing his chance here as the couple and their handlers sweep on by, that’s his mate Nigel on the other side of the mob with the cap by the way. Sammy and Nigel reckon there must be plenty of babes left inside after this lot have departed, ditto booze.

Tony is being super-cool, doesn’t have to raise a finger, and she seems happy enough to be headlocked out the function door down the steps and into the car. Buying a pizza takes longer.

Pic (2) of the series and who’s the only person since Cinderella to lose a shoe on the way out of the dance?

Tony’s snatch mob seem to be a little out of order here. Phillip – he’s the one in the lead with no hair and an air of serene transcendence  – he wants the car door open now or she goes in through the window. Arthur, he’s the suit just behind Phil, is being very pro-active and has just given them both a helpful shove down the stairs, he has also slyly delivered Samson a knee in the gonads.

Arthur has a few issues in that regard, nobody gets into this dance wearing a T-shirt while he’s on a mission so he’s buried a kneecap where the sun doesn’t shine.

Tony is looking down for the missing footwear. He’s a souvenir man young Tone. Shoes, knickers, small remnants of ripped clothing – it all goes into the pool room.

Samson has decided to make a break for the door, Nigel (on the other side) has decided that the couple or fifteen rum and cokes someone forced upon him last night might be better deposited on the grass on the way in.

The snatch mob has now grown to ten and we can see the first signs of doubt with Julso.  The footwork here shows that she’s thrown on the brakes. She’s thinking enough of this creepy meditationalist going for a quick under-arm fondle, plus where’s my handbag?

She’s also thinking that the only way these oafs are going to get me into Tony’s car is drag me. 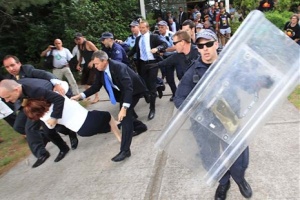 What’s the best way to get a woman away from a venue and into the car of her favourite guy? I’m glad you asked.

You get her into a headlock, push her down some concrete stairs so she loses a shoe and when she trips up on the home run you drag her backwards towards the boy-friend’s ute, and just in case the doors don’t work (it’s a Ford FG) Jackson here on the left has popped the back-window. Handy fellow Jacko, and he never loses the shades. Bodacious move that.

So now all that’s left to do is bundle her onto the tray and tumble her through the back window – hopefully she’ll end up heads-up, then everyone will be laughing.

note: the head pic is not Julso, it just oughta be. Meet Alicia .

Tags: a tribute to our leaders, gillard abbott australia day, gillard attacked, the castle
From: Works
← the lennox. lunch.
the corporation and what troubles you →
11 Comments Post a comment