this was bondi ~ barry mcguigan – magoo – the string magician

A typical day with Magoo:

First he would clear a small space at the base of one of the half buried boulders that littered the southern end of the beach then lower himself into a full Asana or Malasana squat where he would silently contemplate an inner vision for a considerable period of time.

Enough time for any young women sunbaking nearby to slip away to a quieter corner and for the curious youth to sidle in closer, sometimes to offer advice.

The only shows at Bondi Beach in those days were Aub Laidlaw measuring women in bikinis, Jack Mayes bailing up renegade boat crews or Magoo inhaling string. These fellows were The Bondi Elders of the Time.

Messrs Cochran and Dillon are the subjects of a further chapter. There is much to be written.

Inner-visioning complete ^ , Barry would raise his body off the ground with a powerful arm lift then up-end himself in one smooth motion with his back to the rock. We would marvel at his breathing control as he worked the air through his lungs and into his lower abdomen before exhaling it all in one long, silent expulsion. At times he would suck his stomach back so it outlined his spinal cord.

Magoo didn’t appear to have been born with intestines and the small lumps visible where his stomach should be were believed to be either vertebrae or dried green peas. Barry wasn’t a hamburger eater then, still isn’t now. Blood has never passed his lips.

The Sutra Neti exercise though was the main event. 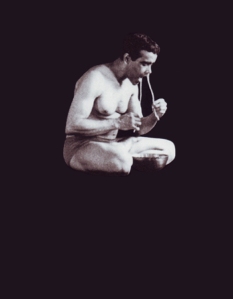 Barry, still up-ended, would introduce a piece of white cord to his left nostril and without any further assistance from his hands was able to manipulate it up that particular nostril, around the point of birfucation then down the other nostril where it would emerge without any discolouration – not that anyone ever examined it too closely.

< – – – – This chap is obviously a learner. Into the nose and out of the mouth. Note the upright position and use of both hands.

What should be understood here is that in 1959 nobody jogged, nobody stretched or practiced isometrics on the railings or concrete walls of the Promenade and there was only one gym between Bondi and Charing Cross. Pizzas were 30 years away, Milk Bars sold milkshakes and smokers fired up cork tipped Craven A’s or Turf. An incoming ground swell was thought to be the result of five days of hard offshore westerlies and synoptics were Chapters of the Revelations.

The Astra was a hotel that sold cold beer and lunch was a cold coke and a cherry ripe.

There were no tits visible, everybody but boardriders wore sluggos, English backpackers had not been invented, everybody spoke Australian except the Italians and Greeks and clubbies in their surfboats regularly attempted to kill people by coming in through the crowds broadside and out of control.

The surfing manoeuvre of the day was The Death Cut, all the boards were made of balsa and decent people didn’t settle on the southern end of the beach.

Magoo was a contradiction; on the one hand he was a shy and modest young man, yet every weekend he stood on his head in the sand on the busiest beach in the country and sucked string up and down both his nostrils.

Though it was known at the time that many of his colleagues appreciated the string routine because it kept him quiet for an hour or two. Barry liked to have a chat you see. Blow the ears off an Indian Elephant in fact.

Magoo has survived the years that have accounted for so many of his friends; he remains competitive in an annual event that is named after him and remains unwell for only short periods and by all accounts remains unchanged. He unfortunately suffered early maturity at a tender age.

The nickname Magoo, according to impeccable sources well within range of retribution, was earned one day at Bondi when several of the lads – not including Barry – were doing a spot of spearfishing a little south of the baths. There they were surprised by the sudden appearance of a large and inquisitive Blue Grouper and as they left the water a little later they suggested that Barry go down for a look-see himself, an advice he promptly followed.

Always the good lad was young Baz. Where? What? Who?

Word had it that Barry, despite several valiant attempts, was unable to claim a sight of the fish despite its repeated, friendly approaches, and The Magoo (the shortsighted) was he thusly named and in perpetuity.

What is not generally known about Barry is that he shares some of the sterling characteristics of the Chinese Barefoot Doctors of the Great Leap Forward era of 1958, in that he had little medical training, no proper equipment, but a large share of enthusiasm when it came to the caring of the sick and injured.

Like the day Mick D. suffered a misfortune, and whose full name has been withheld here or he’ll ring me.

Mick and Barry and a few others had been surfing a reasonably remote reef south of Sydney called Voodoo, and on coming ashore Mick walked on a nest of urchins, puncturing both feet over twenty times. In intense pain as the poisons exuded themselves from the broken spikes he asked Dr. Barry Magoo Barefoot McGuigan if there was something he could do to assist.

The good doctor immediately hurried to his wretched VW and returned with an impressive kit of surgical instruments, which included an old surf towel, a penknife and a fork.

– which he used to dig out every spike he could see, and some he could not but suspected were there  – all of which were exceedingly small and almost invisible to the naked eye, and at this stage of the narrative I would refer you back to the Blue Grouper incident ^ above, and though at no time do I criticize the accuracy of the teller of this particular tale, but .. , you know?

Nevertheless Mick survived both the injury and the treatment and went on to play some reasonably competitive tennis. His surfing didn’t suffer too much either, and like Magoo, he still has a head of infuriatingly full hair