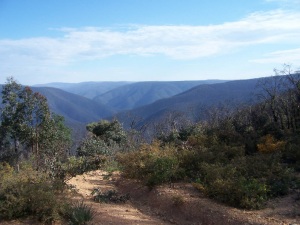 Toby carried his few clothes, his letters and picture of his grandfather – and the woodchip – all in a small cloth bag.

He sat alone on the carriage seat, smalled up against the window and quiet, lost in thought.

An elderly couple sat opposite watching him. The woman’s gaze traversed the boy, his bag, his unwashed brown hair and dark-circled eyes. Time-worn shoes polished hard, chips and dents on his young knees and bare legs. Brown legs.

Her husband sucked an end of his yellowed moustache and eyed the small boy with large suspicion. Possible runaway he thought, being sent back home for more misery. Uncontrollable. Not my problem.

‘ Go on! ‘ She whispered, with vehemence.

She looked at him with a livid eye, ‘ he might be hungry the poor little tike, he’s not one of your blessed dogs you know! ‘

The Conductor had told them earlier of the boy’s solitary travelling arrangements and he had asked that they keep an eye on him.

Stan chewed the wetted end of his moustache a little more and slowly rubbed his big hands together, they made a dry rustling sound, like mice behind a thin wall.

‘ One day I’ll get to know what you’re talkin’ about, ‘ he grumbled with a long-suffering sincerity.

Alice, as she was known, lifted a brown paper bag from the seat beside her and took from it a banana and a small pale apple. She watched as Toby glanced away from the window; he looked at the fruit and then looked up and met her eye.

Alice beamed at him. She had born five sons and knew the psychology of a boy’s hunger. A pity it was all lost on them as they grew older.

Stan shifted his weight off an unpleasantly numbed buttock and ploughed one of his hands into a back pocket from where he drew a small bone-handled pocketknife.

Stan, now impertinently mute, skinned the fruit with a few deft strokes and offered it to Toby on the tip of his knife, with a wink.

And Toby smiled as he reached for the fruit.

– and Alice happily rummaged for her knitting and glasses. Job done.

Stan pocketed the knife and resumed his eternal personal circumspection.

This was Toby’s first time on a train. He and his father would sit on one of the granite outcrops behind the station at Beaudesert on summer evenings and watch as the night train to Brisbane passed through the dark bosom of the valley. Sometimes they would try to sing in harmony with the howl of the steam whistle, and the sound of it had always made him feel lonely.

Now he thought of his home at Beaudesert and wished Ned was with him. The strangeness of the cities and towns they were passing through filled him with a hard longing.

Later in the afternoon Toby went along to the buffet car with Stan and Alice and as they ate he gradually began to shed himself of the silence that had cocooned him all day. Stan’s quiet gruffness reminded him of Ned and when Alice left the table to see to other things the old man, after rubbing his weathered face hard for a bit, spoke some.

Toby swallowed the mashed potato and reached for his glass of cordial.

The cordial spent, Toby wiped his mouth on his sleeve and frowned at Stan.

‘ Wolves eh, well I’ve got three border collies meself and they all eat like horses they do. ‘

That said he took an apple from the fruit plate and peeled it with his pocketknife.

‘ But I don’t know their names yet, ‘ Toby said as he took the apple slice Stan handed him, ‘ I think that they are really dingoes. Can I have a go of your knife? ‘

Stan closed the blade into its handle and handed it over.

Toby bent at opening the blade, his unblemished forehead knuckled in concentration. Then with the knife opened he looked up and direct into Stan’s face and asked the impossible.

Stan grunted in surprise, but he was looking hard into the lad’s face.

Clear-eyed blighter he thought, and seems like a settled little bloke everything considered.

‘ Jest stick it into your pocket when the little lady reappears, ok? And don’t say nothing, and don’t ever play with it.‘

Stan and Alice left the boy asleep on the train at Newcastle. He was curled up on the seat under an old rug that the conductor had found and his head was resting on the cloth bag.

Alice bent down and kissed him on his forehead and as she left the carriage she was unable to contain her tears.

During the one hour stopover in Sydney a rail clerk sat with him in one of the waiting rooms and bought him a hot chocolate and some biscuits. He tried to talk to Toby but the little boy was too tired and fell asleep before the chocolate had cooled enough to drink.

At 11 P.M. that evening the south coast train reached Twofold Bay and another conductor accompanied Toby off the train and stood with him on the platform to be sure he was met.

‘ Didn’t you say that your Granddad was going to be here?’ he asked as they slowly walked down the length of the deserted platform.

‘ Yes, ‘ said Toby quietly, but his eyes were lowered and his head was heavy with sleep.

There isn’t anyone here for you yet by the look of it; do you know what he looks like? ‘

The conductor looked at his watch and held his hand up once more to the engineer who leant out of the cab window, watching them. The station staff had been rostered off long ago and there was nobody else about now that the few passengers had left the station.

– except for the black silhouette of a man standing in the shadows across the northern side of the tracks, who whistled once, slowly.

And when the boy raised his up eyes he saw him over there, where he had said he would be.

‘ He always wears a hat. ‘ Toby said and he offered up his small hand to the conductor, who shook it with a great solemnity. He too had seen the hat wearing man waiting on the other side of the rail crossing.

‘ Well goodbye Tobias, ‘ the conductor said, wondering about the nature of this little boy’s future,  ‘ I hope it all goes well for you. ‘

The conductor to open the gate that allowed him to cross the tracks, and watched as the lad stepped across the moonlit silver tracks to meet his grandfather, and once he was on the other side the two of them stood over there facing each other for a moment.

One Looking up, the other looking down.

Then the old man leant down to pick up his grandson and they were soon gone from sight.