boys in another land. 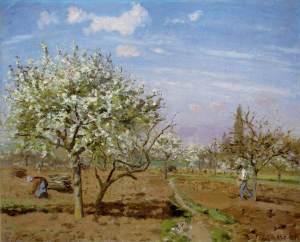 A few of us took the itinerant’s path after High School – The 36 hour train ride from Sydney to Melbourne and then on to the South Australian border. Old wooden carriages crammed with men of all ages, all nationalities, all heading for the picking season and labour hire, the fruit orchards and grape fields. The red dirt and the desert heat.

How the carriage stunk with cigarette smoke and the heavy air of unwashed clothes. Men played cards or slept on the floor, drunks rummocked away their displeasures here and there. The single toilet became unuseable after two hours and the open-air link between the carriages was used for all disposals.

They bussed us from Mildura station to a church hall somewhere to the west and we stood against the walls inside as the growers stepped up in turn to choose their pickers from the forty men available. The last four chosen were Chalky, The Big Queenslander, Neville and The Cockney. They were the youngest. The ones with their insolent youth, long hair and soft hands. Ian’s new men. He pointed at them one by one then jerked his thumb to the door. A couple of growers laughed it up as they walked past him.

The lads followed Ian out. He pointed to his ute. They threw their bags and cases in and climbed up after them. Two months away from the sea.

What fool suggested we do this …

Saturday nights for fighting and drinking in Mildura, wandering the streets and into Church Hall dances looking for girls. Girls who shrank back against the walls as we rollicked in.

Accommodation was two small shacks, only one had a kitchen, both had been empty for almost a year and the hessian ceilings writhed with bug larvae. Wire cots hardly covered by straw palliasses, one small clean fridge. The nearest drink was in Mildura, 20 miles away. The toilet a hole in the ground with four walls and a tin roof. The owner’s wife stood on her kitchen step glowering at us, she must have known he had the last pick of the men this season.

Every fly in creation, small black snakes, scorpions, biting ants and two miles away an Aboriginal encampment, the Yerre Yerre. A hard place.

Neville and the Brown Snake.

All four pickers and Ian were standing around the stack of empty fruit boxes. Chalky was holding a large wooden stake, Neville a long bladed shovel and the Big Q’lander his rifle. Ian the owner stood leaning against his tractor rolling a smoke and having a think.

He had taken off his old felt hat and his spare-haired skull looked white and vulnerable in the hard sunlight.

‘ A snake, ‘ this from Chalky who was nervously moving in and back from the woodpile. Ian shook his head.

‘ It was a brown mate, ‘ said the Queenslander. ‘ big bastard too. What do you reckon? ‘

The owner took a little time getting his smoke alight and when he finally managed it he stuck the greasy hat back onto his old head.

The Cockney trotted over to the tractor shed, followed by three cattle dogs and the farm cat. Trotted back with an armful of rope.

‘ Youse blokes all stand over there out of the way just in case it makes a run for it. ‘

Chalky took a few steps back. The Cockney stood firm with the ropes over his shoulder, his hands in his pockets. Neville raised his shovel over his shoulder and hungrily raked the boxpile with his eyes. The Big Q’lander, out of sight on the other side just farted loudly, twice.

‘ Ok, two of youse grab an end each from the Pom and walk the rope around.’

Chalky and the Big Q. encircled the boxes with the rope and then presented the ends to the owner who tied them both onto a tractor stanchion. He jumped on and started the ignition. Everything disappeared in a cloud of roiling black smoke as the owner wrestled his way past burning oil and unresponsive gears.

He quickly backed up the tractor ten feet, the rope tightened up around the pile of boxes and down they came in a dusty tumble.

(Note: The Brown Snake has the second most toxic poison of all Australian species, second only to the Taipan. It can move extremely quickly over open ground and will bite aggressively and repeatedly. Death is inevitable without treatment and is almost immediate.)

‘ AAAAAHHHH … !!! THERE IT IS !! ‘ and after this shriek of warning Chalky dropped his stake, turned and fled.

The Brown Snake whipped out low and fast from under the collapsed boxes before suddenly stopping and rearing up on its lower body. Everybody but Neville stood rooted to the ground as they watched, fascinated, as the reptile swayed and weaved that part of itself that stood a metre above the ground.

Eye to eye to them all.

Come and get me.

– and Neville, displaying all of the attributes of his dour and pragmatic cricketing ancestors – took two quick steps forward and caught the snake’s poisonous head an almighty and ringing blow with the steel shovel-end.

They would wait around the street outside the Astor theatre watching us – we were the only ones with money on a Saturday night. Kids from the eastern cities, boys who had seen the sea in its endless immensity. The Yerre girls couldn’t comprehend a living liquid plain that raged one day and was docile the next.

We were all the same age and we sat at the back of the upstairs stalls hoping that a Mildura street approval meant we had some company for the show. The girls always came in after the lights were turned off – rustling past us, fragrant – squeezing past our knees. In the dark.

Tags: Brown Snake, Eastern brown snakes, Mildura, out of bondi
From: Mildura, Works
← surfers who work – the smoko
the shark in the wave … possibly →
18 Comments Post a comment