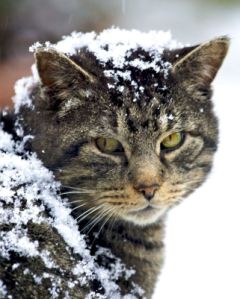 Too much rain, too much onshore wind – the copings are done for, the shoulders and ridges are beyond repair – gaps in the tiles all over, battens probably rotten, sarking ripped away by rats – gutters full of rust and dirt.

Meet Frank, the local roofing specialist – he’s up there on the roof now and every word he says is another $1,000 onto the cost of this de-commissioned wreck bought cheap off whatsisname who had to leave for Bali forever in a big hurry six months ago. Baggage one pair of trousers, soiled.

Here’s your hat and what’s your hurry.

Frank is a man of few words, he’s just back from Tasmania. Bit of a diver is Frank, abalones and spearfishing. Cooks his own lunch onsite.

‘Freezing down there. ‘ he says, ‘ Antarctica. Bloke had to winch a ten-foot log onto the fire and get up every two hours to keep it burning.’

Frank is frying up a couple of pieces of chopped bacon.

‘ Heard this low growl about 2 am and looked out of the tent, saw a bloody feral cat sitting by the fire – big sly bastard. Looked at me and looked away.’

Bacon done he takes it off and breaks three eggs into the pan. Puts it back onto the heat.

‘ Slipped over to the ute and grabbed the speargun, big three-rubber job but all I had was a crab prong at the spear-end.’

Scrambles up the eggs a little and adds back the bacon. Tosses them together slowly.

‘ Got a bead on the cat and let it go, got him smack in the shoulder and he took off like a wounded buffalo – ripped the gun out of my hands, I had to step onto the cord or lose the lot.’

Drops in some black pepper and chili flakes, a little salt.

‘ It was like holding back a train, I had to jam a tent peg over the cord to stop him. Banged it in with my foot and grabbed a shovel out of the back of the ute. Then I started dragging him back to the fire. What a racket!

Takes the pan away from the hotplate and sprinkles a handful of parmesan cheese over the top of the mixture. Puts it back on. Wiggles the egg base loose.

‘ Never mind that he’s got three barbed prongs buried in his shoulder, getting him close enough to dong him took about fifteen minutes – and even then he didn’t stop fighting until I’d near chopped his head off with the shovel-blade.’

Takes the pan away again and puts it under a hot grill.

‘ I weighed him on the fish-weights – he came in at about 30 kgs, and that’s without his head. That got footballed into the creek. The bastard! ‘

Browns up the top and then slides it onto his plate.