surfers who work ~ drugs of choice 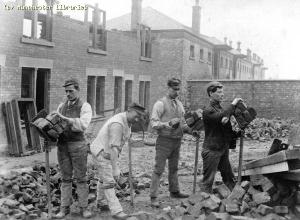 The taking of drugs during the working day is completely unacceptable and is not condoned by the writer – (despite some evidence of a permanent record kept by Australian Customs that may or may not relate to their hand delivering a package mailed from Durban to Warriewood in 1968 which contained a masterful amount of DP wrapped in a Durban Pro T Shirt) – unless it’s Friday afternoon, or if a visiting grower calls by to have a social lunch and promote a new variant from the northern rivers, or if the boss is absent, or on the job, or if the job is on schedule, or lost in time, or if it looks like rain may commence, or stop, or indeed continue.

The unacceptable drugs that may not be taken during working hours are hard liquor (no one will work with a drunk) good hashish (taking this at work is by definition drug abuse) Acid (the user becomes coldly unemotional and may want to sit on the roof for long periods waiting for the sky to go away). Marijuana LEAF (if the user cannot afford buds his reputation on the worksite will be permanently diminished and the wheels taken off his vehicle and rolled a great distance)

Ecstasy and amphetamines, in fact any phsychostimulant such as Adderall, Dexedrine and Vyvanse are equally unacceptable onsite as (1) no builder will ever want to be put into the position where he is tempted to hug a plumber, and (2) Speed, by its very moniker, is hardly compatible with the accepted philosophy of a charge by the hour contract.

There is then another short period of toil until afternoon smoko – and another suspension – and then the final wind-down to three-thirty knock off. The boss is usually long gone at this late hour; either twilight sailing on the Pittwater or pleading with the bank, so the standards may well be put under some stress.

However the roughly rolled shared joint or the chilled slab is commonly consumed in the afternoons at knock off, with a complacent vigour.

Tags: amphetamines, apprentices - learning a trade in easy instalments, drugs, Ecstasy, phsychostimulant, rock and roll, sex
From: Surfers who work, Warriewood, Works
← Paul Fisher shows us that all you need is water
tangiers in 1964, without punctuation. the dancing boys. →
No comments yet