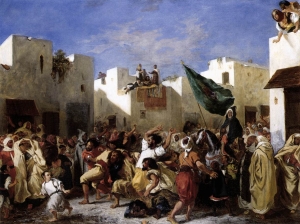 Best of all was the walk from the ferry to the town gates and especially when this nice looking little Moroccan chummed up beside us and suggested that if we were after a little smoke then he was the chap to follow which of course we did because we knew his line and he led us past all the best places to a part of town that was more warehouse than hotel and the big wooden street door he hammered on was opened by somebody nobody saw and then  after walking up the three stair flights and through two more doors he sat us down in this room that was wall to floored by sacks of kief donkeyed down from the Atlas mountain plantations and we watched fascinated as he took up a chopping board and knife and distributed about a dozen clay kief pipes around us as he took a bundle of grey dried bundles and fined them up good enough to pack and fire and inabout five minutes everyone of us was smoked to glory and all this fellow did was laugh and chop some more and as the pipes got gluey we chucked them into a corner and had hands out for more because all he wanted was about thirty quid a pound which was a good enough to see us on some beach about midnight that same night thinking that here was the paradise that europe would never be and it surely is a miracle of neurons that all of this night is remembered especially the three hours we spent in a room where they auctioned off dancing boys to men all around us both local and english though this may be another roadwork.

Tags: Burroughs, dancing boys, Kerouac, kief, morocco, Orlovsky, Tangiers
From: Works
← the nimbin route from byron
Paul Fisher shows us that all you need is water →
3 Comments Post a comment