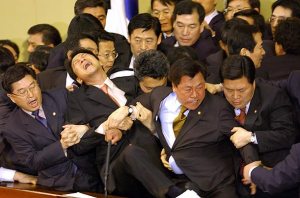 Mick George and Dave Rankin (not their real names). They are the feature here.

Senior Sergeant Dave Rankin and Special Constable Mick George (not their real rank) were sat side by side in the  Tim Bristow bar of the Newport Arms one Monday afternoon after the weekend dog shift. Big tired men hardly talking, just letting the drink do its work.

And the afternoon westerly light washes through the open veranda and the last of the punters who had paid to hear Layne Beachley talk about Sunset beach and her total commitment to a self determination wanders away to his dinner and his kids and a little nighttime TV. Enough of Layne and Ken re-telling their manufactured drama.

Mick drinking plenty of OP and water as usual, Dave on another bottle of warm bourbon, their conversation desultory, muted.

Blessed piss. Both men are subsumed by alcohol and a tired fighters’s rage.

Blessed be the badge that bears the name.

Be a cop, they said, and go gently into the drunken chaos of a Corso night and do precious little. Hands tied, hotel industry dominant, local member subservient to his backers, government in their warm beds.

Deadly glass fights two feet outside the door of the Steyne is not a violence statistic attributable to the hotel as it did not happen on or within their premises.

Everywhere on the streets is a drunken and dancing chaos, the animal virus let loose. Two men throw another into a plate glass window that bends under his weight an bounces him back towards them – he falls to the ground and they kick him senseless. The night is a welter of bloody violence and men and women roam about in a savage and unreasoned frenzy – savages in a civilised place.

A young girl comatose from drink is dragged away from the gutter where she sleeps by three men who tell the watchers that they are all old friends, they disappear with her into a darkened laneway. They are laughing with something other than mirth. They have a van in there.

Be a Cop, they wondered, be a COP!

And be allowed to do something.

Two weeks into 2010 Mr and Mrs Ivor Chandler, visitors from the Netherlands and staying at the Manly Radisson for a week, wrote back to their twin daughters in Amsterdam.

They were also interviewed by the local paper after information was supplied by other witnesses to the assault, however the paper declined to publish. A copy of the letter to their daughter is as follows.

We decided to walk from the hotel to the northern end of the beach, the night being so calm and with the sound of the surf so noisy, that massive rumble, so unlike home.

Many of us were on the promenade that night when three youths came from a shadow under the pines and fastened themselves onto a young couple that were strolling the way just in front of us. Just walking hand in hand, very young.

They surrounded the boy, who was protecting his girlfriend, and in a moment he was knocked down onto the ground and became their football. They played a kicking game with him and one of them stamped into his face. I did not understand their pleasure as they laughed all the time.

We immediately turned away. How the girl screamed for help.

My husband and I are over 60 years old, he was a soldier in Indochina, and his heart is spent. We could not help. I was sickened.

Then two big men quickly walked past us as we retreated from the assault on the young couple, and they seemed silently intent as they made a straight path to the fight, such as it was with the poor boy on the ground trying to curl away from their boots.

One of the men took hold of the hair of a youth and wrenched him away from the fallen boy, and the other man smothered the one doing the kicking. He took him by the neck and threw him into the base of a pine tree.

I heard a bone snap, I heard a scream that was not the girl. I watched the big men punch the youths very hard and very quick. Rapid blows, like a fighter. All to their heads. Six or ten punches.

Then they tossed them over the seawall! Both of them. Like garbage.

Where they lay broken and stilled. There was rock and sand where they fell. Jagged stones to stop the sea wall from falling into the sea.

And the third youth fled like the dog he was, into the darkness from which he came.

The two big men called an ambulance and stayed until all was well with the young couple. Nobody talked to them, and they didn’t talk to eachother. Not even during their attack.