early is the hour 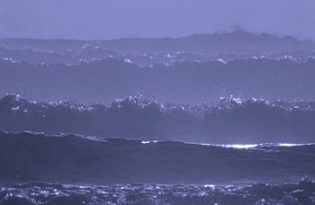 Early is that hour on this coast before the easternmost and diamonded southern stars have their perfect glitter impounded by the strength of that slowly rounding furnace of an eternal sun.

Glimpsing up hot from an endless end of sea.

Early is the hour when two couples sit in some type of shared and carnal embrace on the raised concrete surround of the rockpool; all sheltered under a dark sky and comforted by the warm beginnings of another clear day of north-westerlies. Where they grunt like coupling beasts, pleasured, dumb.

Their clothing is scattered about, their chastity ages wasted, their sensibilities lost to cocaine and blunted by dumb alcohol, they sit and fuck in a cluster of luminous flesh.

In the unmindful dark.

Though they are mindful, somehow, of the metronomic rumble of seas breaking strong and far beyond their scattered imagining, just over the pool rail, just a hundred or so yards away. Violence beyond their poor measure.

Just out the back.

Breaking seas that have smoked up the entire cove overnight and that sometimes crack like rifle shot in the pre-dawn dead air.

Waves that cascade their crests in a perfect falling line of luminescent draw. Tracks of waves.

And the three figures that glide past them like spectres, all black suited and holding their ivory sheaths may well be some kind of Harbingers of Righteousness, though they are not. And not a glance do they spare at the waste.

All slipping down by the darkened poolside and away over the rail and into the equally black and furious sea – silently, quickly, expertly. Without murmur or advice they disappear into the mayhem.

Figuring their darktime path through undertow and rip, wearing away at the muscular heat that drives the hundreds of strokes that leads through the acres of whitewater and the final and brutal assault on the break line.

Then the tenuate calm beyond, and its fruity expectations.

Tags: carnal misfits, Works
From: Avalon, Works
← surfers who work ~ what to wear?
never look back →
6 Comments Post a comment