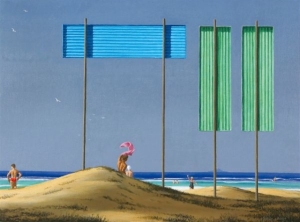 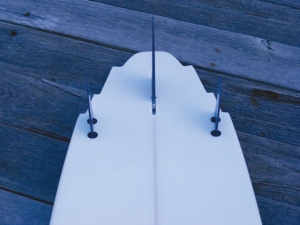 The marriage failed quickly, undermined by poverty and cocaine, the dichotomy of our times, and she was left alone with her little boy a year after his birth.

Their rented home was a ruin when they moved in and every time a storm swept up the coast and rattled the asbestos rooftiles an invisible poison rafted through the house and into the deep-breathing lungs of the little boy left asleep in the house, alone.

Mum out drinking at the RSL; be back soon she said as she tucked him away, all locked in, back before dawn, give mum a kiss.

The two boys next door were each given a new surfboard one Christmas, they had them laid out on their back lawn that day as their dad showed them how to cover the decks with a fine coat of wax, then he glued up the tail blocks for them. They had new covers and new leg ropes, they held up their new boards this way and that, and their surf chatter was insistent and with mum sleeping in again he pressed over against the fence and watched them through the palings. Happy Christmas.

His father remained in the town labouring now after his last business failed and although he never overtly sought out his only son he knew him well, and he took care to watch him from time to time – always from some distance.

How he grows, my young Max.

A couple of times a year the local council collects the household clean-up and invites all the residents to dump their unwanted possessions onto the roadside outside their homes.

Scavengers roam through the piles of discarded rubbish at night, men from far out of town, knowledgeable partisans with their flashlights and foreign tongues. They sift and sort through the piles and load their rusted flatbeds with treasure for nothing.

And after they have gone Max’s father patrols the dark streets and collects his own collateral, dumped surfboards. He usually collects a couple each year, and after three years of hard looking he found what looked like an old MP Fangtail, ridden to the death, but still in one yellowed and bruised piece.

This is the one for Max, his boy.

Max found it leaning against his front door one morning, sanded back, cleaned up, heavily dimpled on both sides.
He found it, this six channel triple flyer pintail, as he was heading to the beach in the hope of catching a wave on a borrowed board. There was no note, but he knew it was his. He knew it the same way he knew that the man who always stood watching him from a long way off was not to be feared.

He watched the little boy struggle his way through the shorewash on his new board, saw how he hung on through broken water, counted his strokes, saw how he looked up at the incoming seas, watched him get tossed around.

Tags: cocaine, Fangtail, Michael peterson, Works
From: Avalon, Works
← einstein on the beach
the surfers reunion →
No comments yet