discrimination – how it hurts 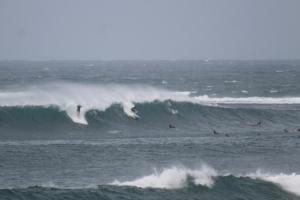 We hound them hard, unremittingly, uproariously and loudly. Because when it comes to catching a wave and they are there, they are all the enemy.

We also discriminate against the sleepy-eyed unfortunate who arrives just as we, the early and the blessed, are towelling off in the carpark after an outstanding session in perfect conditions that are now showing unmistakeable signs of degradation thanks to an earlier than expected strong south-easterly. (pic)

This was the morning a couple of us observed Nick Carroll on a sprint to the sea, running past us, board under one arm, wetsuit yet to be zipped, car probably unlocked, wherever he parked it because all the front spots had our cars in them – and this was at South Newport, Carroll family tribal lands, home of the Newport plus – and here we are up from Warriewood and beating him to it.

Could it be worse? For him?

So Nick Carroll had to be called out as he hurried by.

Right in his left ear, not to loud, just for him.

‘You should have been here two hours ago.’

Lap-swimmers discriminate, this is laid down in the law. They discriminate against those who swim up the down lane and down the up lane, those who wear flippers masks and goggles as swimming aids, wallowers, women who swim and talk at the same time and lastly, old surfers deprived of their chosen sport because of poor circulation, unbendable backs, withered shoulders and the inability to command enough respect in the water to be able to assume what was once their undeniable right to paddle out and sit inside.

A fellow of about eighty exiting the change shed looks up at the latecomer, the same man who so unkindly disparaged the elder Carroll at South Newport nearly forty years ago,

and says, with a flinty smile –

What goes around comes around

From: Ballina, Warriewood
← secret commissions
elvis .. you had to know him →
No comments yet