more women in the surf means no more problems. 1 of a series 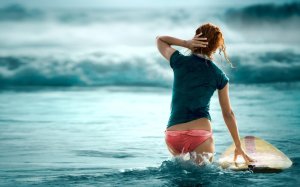 Women have their place, this is agreed. The bed, the kitchen and the second best seat in the house for watching TV.

Women cannot play rugby, or cricket – they risk the fractures of the boxing ring and their chess game is bloodless. Their body-surfing technique suffers as they are waaaay too buoyant to slip inside the body of a wave, they don’t drink schooners and are unable to swear continuously and coherently. In short, they lack a male relevance.

Women though do belong in the surf, and they belong all around it. This can be used to our advantage.

Take the early. If more women surfed than men then the early would be a lonely place.  Where the man can just get up and take his bad air out with him, the woman has a inbuilt list of early morning grievances that must be settled before she leaves the house. Like making the bed. Women do that, and perfume.

Then there is the obligatory 35 minutes in the bathroom – this is both and expulsion and retention exercise that has an infernal and necessary rhythm whether the lady arises at 4 am or 11 pm. Braver men have remarked on the total absence of sound from a room where so much hard labour is being undertaken. Papers bottles and sprays. Brushes soaps creams and rinses. Scissors and files.

Certain research undertaken by the Ponds Institute has revealed that those relationships which involve both a male and a female surfer invariably end in serious commercial disrespect – a man can’t wait forever. To love and honour yes ..

Women don’t like to travel alone to some dark beach where half-naked men gather together in their early morning surf rituals. Some things you cannot witness without good coffee.  That means that a car full of ladies with the same time demands as ^ may well take 5 hours to get to the beach for the early, given the feminine logistics – so how can this be bad?

And do you think that when they finally arrive at the beach they will tip out of the car like mad dogs, all in a frenzy to get out there and amongst it?  This doesn’t happen, women are orderly – clothes that take 30 minutes to put on take 35 to take off. Plus fold and stack. The only disadvantage here is that the ladies insist on using the municipal facilities. No glimpses.

Upshot is, the more of them means the less of them – in the morning.

This is undeniably excellent, so good in fact that we can move on to the female surfing ‘ pack ‘ mentality. There is much to explore.

Tags: stephen hawking, the ponds institute
From: Works
← the shaka .. why do we all have to be so HAWAIIAN?
the advantages of standing upright on a wave, considering the choices →
17 Comments Post a comment