The one who is lithely handsome and infuriatingly deft in and amongst all surfing conditions and who always has a pretty blonde companion in the co-pilot’s seat of the car you have wanted all your life, and who smiles all the while while passing by and who so unnecessarily reminds you of your own long-past and relatively innocuous youth. The one who is pleasant and good natured to all about him while you seeth and discriminate and wish him serious illness and bad teeth. 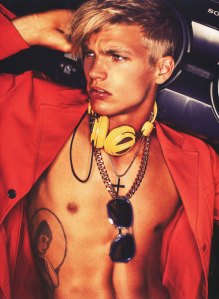 The with a long and honoured pedigree and faultless reputation and who only rolls up when it’s good.

Weeks can pass by, months even, long and successive days of tedious conditions – and when that one dark and perfect morning dawns his car sits there alone and empty in the carpark and his streaking and phosphorescent trails only illuminate your late-arriving unworthiness. So late in fact the only car spaces left you are out on the road with all the SUP’s* and their Range_Rovers.

He’s just back from two months in Indonesia with side-trips to the Phillipines and Andaman Islands. Manus Island, Goodenough, Noemfoor. He has some new scars, he is the colour of varnished wood and his passport is as faded as his shirt. The additional pages made necessary by his mysterious travels have thickened it to novel size, yours has a couple of stamps from a two-day Hong Kong layover in 2001.

He has three boards on his car, all Indo big wave sticks and everybody but you wanders over to have a look at them. Slide them off, heft them around, do rail and rocker checks.** The surf is two foot of onshore muck but it holds more interest to you because you are indeed a loser.

The old beach friend who at best was a competent and timid surfer comes back from ten years as a trawlerman out of Brunswick Heads just in time for the cyclone swell of the century and of course he goes straight out into the mayhem, alone, and catches the biggest 10 waves in his first session. And you know he caught 10 because you were sitting on the rocks, dry and safe, and counting them. Every time he walked back out to the jump-off spot and past where you were sitting you pulled your hat down, put the sunnies back on, and pretended to look for seashells under the rocks.

He’s at the premier of  Jack McCoy’s newest movie and walks into the room surrounded by lovely girls, powerful sponsors, famous professionals and as he passes by he stops and says hello. He remembers your name from that one year you shared in high school five years ago. He was captain of the rugby team, you were the fifth reserve. They went through undefeated, you never got a game.

Everybody knows him, and everybody likes him. Except you, and you sit there alone and fester. He’s up the front with all the beautiful people and Jack McCoy. They have coffee and they all got in for nothing, you paid $15 for a backrow seat behind three massive Tongans who keep turning around to look at you. They look angry.

– and tonight of course he is the star of the show, the new Occhilupo.

For those readers not familiar with Mark Occhilupo, seen here after wagering a staggering $19,876,234 on an even-money certainty at Brisbane’s Eagle Farm last week, we can only say that beneath that conman outfit and suave demeanour beats the wild and unrestrained heart of the wildest and most unpredictable surfer of many generations.

* Stand Up Paddleboaders – lepers of the surf, an untidy tribe of low-browed dimwits all, lower on the social scale than goatboaters – dreadful people with low intellect and vast quantities of bad-blood.

** Rails are the edges, rocker is the rise in the nose and or tail – these are the sacred mysteries of surfing and should only be spoken about in the presence of other surfers.