The bumpiest wave in the southern hemisphere, the most shapeless, the ugliest – but what does this matter when Ben Buckler throws up one of the best Hero Waves in Sydney.

A Hero wave is one best qualified by the ease of an onlooker’s access to a close vantage point; like a carpark with enough room for a couple of bus loads of Chinese tourists to gawk a while before they are turned around and taken shopping, or a municipal park with shaded picnic tables, or a couple of apartment blocks stacked along the water’s edge.

Ben Buckler is an over-achiever here. Councils have been kind. We have three out of three.

Hero waves are famous for their ability to make the ordinary surfer look like a world-beater, particularly when his audience doesn’t even have to get out of the vehicle to watch. 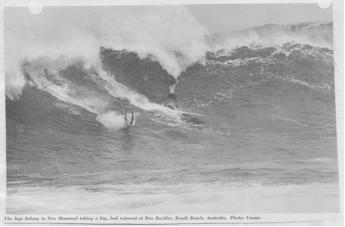 About 1960 – Nev Manstead spots a lobster

Optimists who like to head out to the Ben for a spot of large bumpy big wave riding are sometimes a little deflated if they happen to trek past the North Bondi Fishing Club’s boatshed door – this is where the members like hanging their trophy shark jaws.

– which is not a surprising seeing as how the headland is a known breeding and feeding area for all variety of sharks –  club  members, mostly beady-eyed little men burnt the colour of old furniture and who speak in some obscure and guttural dialect, chortle and spit on the ground as surfers pass by. These men are known to bring out their entire collection of shark jaws on the days when Ben is surfable, and lay them threateningly all around. The casual onlooker wandering around their boats and teeth might think that all they do all day is sit in the sun, drink from the necks of beer bottles and listen to the races.

Yet sometimes they would pop a tooth out of a jaw drying on the door and give it to a youngster to wear on some string around his neck, and at other times they bloody well would not.
Ben Buckler is also the home of Demetri Maskovich and his troupe of boofheads – one look at these overmuscled oafs swinging on their ropes should be enough to convince the most sceptical reader of the great deterioration of what was once a quality population in Bondi.

Aub Laidlaw , the Bondi Lawman, would not have tolerated these steroid monkeys strutting around on his beach – out they would go with the girls in bikinis and men with lisps. There can be virtue in intolerance.