Months of heavy rain over the last six months, he says, all over the eastern Qld and NSW border. More on the monsoonal belt further north, and all being sucked down by the long low pressure fronts stretched down the eastern quarter of Queensland, the ones that don’t ever go away. Three inches rainfall a day in the hills. Ten consecutive days of heavy rain. 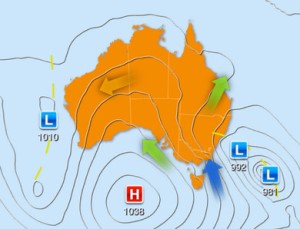 Then about a month ago there was a three week period of fine weather over the same border area. Long warm days. Wet morning grass. Wet air. Wet air sucked up out of the ground and cooked up a little bit every day for about 15 days. Millions of acres of it held up there.

Then the low weather front re-appeared and eased all the wet warm air down its spine, south, where it reached the NSW Vic border and the cooler air over the mountains. There it curled back around itself clockwise-like and sucked up some cold air.

The sky would have told it.

Then the result spilled off the land and over the sea – and here it comes.

Tags: clear air turbulence, june 2102 east coast swell, ripley, Synoptic charts
From: Works
← how to know when you’re too old to go
what I heard, about george greenough →
4 Comments Post a comment