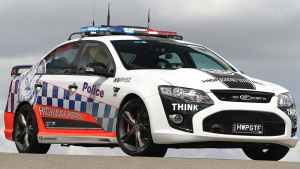 This is about food. Takeaway. Ballina takeaway, the home of fresh fish. This is about NZ Hoki, frozen after being caught and delivered to Ballina in the fullness of time.

The takeaway fish and chip shop sits a little way up the road from the local copshop, three lovely girls plus the owner beavering away behind the counter cooking up an array of takeaway tucker .. vats of hot oil, a little sourness in the air and a walloper sitting in a chair by the door waiting on his feed. His V8 superstud highway predator parked outside.

Who hasn’t seen one of these highway hornets in his rear-view?

Who hasn’t feared The Swab?

This is the Northern Rivers talking and we know the fear of the stoned and driving. But we do, drive stoned, because like the local wallopers we get hungry. Asamatteroffact we get out of control hungry. So here we are tonight in the Takeaway, us and him.

Then us and him becomes me and them because just as Walloper 1 leaves with his dinner, Walloper 2 and 3 walk in. Now we have two twenty- shot pistols, two capsicum spray-guns, two pairs of handcuffs, two back to base mobile phones, two bullet-proof vests, two lapel cameras, two retractable batons and two hungry Senior Constables in close proximity. And another highway flickerfest low-slung V-8 rumbling away on park outside.

And outside the door, two boys in blue ..

‘Scuse me mate’ says I on approach.

Timothy Leary once said that in times of an imminent apprehension by the forces of law, one should deflect the possible by entertaining the improbable.

So we fake it.

‘You blokes eat here often, do you?’

The one thing a true stoner knows is how to judge the quality of the food on his plate. Read Kerouac, know that he and Ginsburg tested Tangiers for its tucker and wrote expansively about the benefits of a nightly intake of tuna fish and tomato rolls .. that and black hashish.

The moral here is never to eat Walloper 7 rated Hoki in Ballina. Better to chew upon warmed white rubber .. then take the back roads home.

Written in fond remembrance of Pete McLintoch, a Canadian loose in Morocco in 1965 with only Australians as his companions.

From: Ballina
← the widow
the day everything changed →
No comments yet