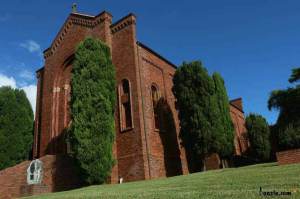 Saint Kevins sits high above the town of Bangalow, and like many churches, its chosen position commanded the town and the people who dipped in hard enough to build it. Back then. The timber-cutters, returned WW1 servicemen and dairy farmers who drove their herds from the south coast in search of the newly cleared pastures of what was once known as The Big Scrub.

Mount Warning silhouetted on the skyline: named by Cook to alert those who followed him north of the shallow reefs and rocky outcrops that abutted the coastline. Mount Warning named thousands of years earlier by the Bundjalung people as Wollumbin. The Cloud Catcher. The Rainmaker.

The Bundjalungs, who were driven out of their homes on this fertile land by the same settlers who built the churches. Displaced, massacred. Murdered with poisoned damper, given blankets infected with smallpox.

Dealt with. Cleared out.

No plaque for them in Saint Kevin’s gardens.

For years Phil drove a twenty-year old Corolla to drop his wife, Frances, at Mass on Sundays. Then he’d sit in the car and wait the hour for her to come out. Not a churchman, Phil, couldn’t take to it. I used to walk up and tap on his door after service from time to time, wait for him to put down his newspaper and look up.

‘One day, mate,’ I said to him more than once, ‘I’m going to drag you in there with me.’ Phil used to laugh it off. Shake his head. No way.

Phil was just a little bloke – five foot nothing – born in Redfern as was his wife, came up here not long after his brother was murdered on Burwood Railway Station after coming home after a late shift. Stabbed Phil told me over a few beers at the Bowlo one day. Again and again. His body left almost afloat in blood.

Frances is alone now, Phil gone two years. Sometimes I sit next to her …

From: Bangalow
← the bahzow diaries – the mousetrap
the wallopers’ rating →
No comments yet