brisbane. the road in 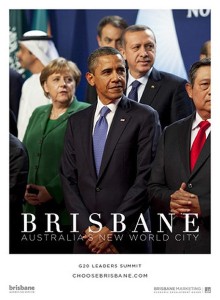 To enter Brisbane from the coast is to voyage up a slime-sided brown, dead river and wade through the stink of a mangrove swamp that can either trap a foot, trip it or both.

Exhausted men have drowned face-down on this trek, gobbling for breath in the thick mud. Men with colleagues so weary of the endless wet miles, the fire-biting mites that move in stinging mists and the mosquitos in their whining dozens who alight and plunge their bloodwick needles in again and again, trying to find the raw flesh and the blood it contains – men so weary of all this that they despair of ever finding the high ground, where they may rest, and eat,

There is a trap for a man wheeling into the city of Brisbane from the coast, a trap set when he takes the Turbot Street exit off the Motorway and who then turns somewhere wrong straight away.

In other cities all you have to do is go around the block and come back to the place where you first made the bad decision. This is like a reload. That’s how you get around cities in cars. It’s the successful application of a product of the mental discipline that got flogged into you at Waverley College by elderly Christian Brother scholars who would never pick you for the clear running airs of a back line on a Saturday match against The Kings School.

No, always the breakaway and thereby instructed to participate in the uglier mess with all the slow-moving grunters.

Geometry. You just put the learned grid lines on the memorised cityscape, which is  Geology. Get a Leaving Certificate pass in both of these in 1962 and a man could become a Chartered Accountant, for life.

But Brisbane streets have no geometry, they have a river, and every wrong turn in that city is a trip up the river.

They had a get-out of jail street somewhere once, just before the all-encircling city roundaway swept you the fuckaway, and from there you could back-street it to the hotel. Now they have a permanent cement bollard in place denying you that notion and a nearby footpath crowded with an unearthly people who watch you intently as you realise that you are about to go around and away, again,

– only to be back in ten minutes.

I have travelled in a white Nissan 200sx that has been benighted by this corner three times in under an hour one summer evening; looking for the Marriott Hotel, the driver a close personal acquaintance and a surfer of little merit. He had tickets for Hong Kong the following day.

‘A double suite please. The one night only. Any floor, front or back. How much? That much?

Well, that will have to do.

And as such it was booked and confirmed. All very pleasant over the radio-telephone lines, Brisbane still lingers in the past in these matters. They sleep at their desks for an hour after lunch to avoid the tropical torpor that lunch induces.

However we were shown into a double room soon after arrival, and an immediate and mannerly objection was raised, the luggage boy turned back, and reception re-revisited and kindly asked: Why room and not suite?

(Passage Two follows; where an unfrocked asian gentleman walks into the Presidential Suite armed with neither knock nor invitation, and where an unknown man is found asleep behind an {unlocked} adjoining door)

G20 next year is the plan. And security the Key.