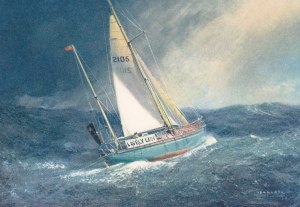 Toby walked back into the shed and after a moment came out holding an old galvanized bucket.

The boy returned to the shed and his grandfather heard the rummaging in there grow a little more enthusiastic. The lad eventually emerged with an old enamel plated dog dish, which his grandfather took from him.

The old man looked at the dish, he scratched his whiskered chin and he pondered over it a while before setting it down onto the ground. He walked around it, slowly. He tipped it over with his bare toe. Alf looked on approvingly. The boy stood watching, his hand resting on the dog’s head.

Today was the day set-aside for building a feeding tray for the local parrots. Tom and his grandson had been watching the forest canopy over the past week and with the help of a small book of coastal birds borrowed from Father Harry they had identified about a dozen different types of birds about the house and lagoon. With the sack of feed collected when Monty visited now dried and shaken out they were ready to entice the birds to come down.

Tom had also tacked up a piece of paper onto the shed door, low enough for the boy to reach, and he had written on it all the birds that they had recognised so far.

An entire colony of both Sulphur Crested Cockatoos and Galahs.

A pair of Major Mitchells.

However and as of yet, no feathers for the headband.

Only when Toby declined his lunch did Tom notice that the boy’s face was flushed and he was twisting around a little as they sat on the grass.

‘ What’s up mate? You feel Ok? ‘ Tom put his palm to the boy’s forehead and immediately felt the sandy hotness of it. The boy held his hand to his belly and stood up.

‘ I feel sick granddad; ‘ he replied mournfully, ‘ my stomach is hurting very bad. ‘

Two hours later when the little boy was sick in his bed Tom decided that he could not risk the problem being appendicitis and they set off on the long trip into town. He alerted the Eden ambulance station using the car’s UVF and arranged to meet them on the highway where the boy could be transferred into the ambulance.

When they eventually arrived at the small hospital’s emergency doors there was already another car parked in the second bay and they waited as the driver helped a very old man out of his seat and into a wheelchair.

‘ Can’t you moor this blasted tub any closer to the dock?’ The old man roared. Frail old fellow, nothing but lungs.

The driver eased his old gentleman into his chair, winked at Tom, and slowly pushed him over to the hospital entrance. Then as the ambulancemen slid the boy’s bed out he heard the sound of the man’s venting temper slowly diminish as he was wheeled down the corridors and into the wards.

Some time later, after the boy had been safely bedded down in the children’s ward and had met all the nurses, Tom met the old man’s driver in the hospital cafeteria.

‘ Yes sir,’ replied the driver, ‘ he’s here to have his tonsils taken out and the old boy’s making a heck of a fuss about it, the doctors are too scared to take his temperature and he won’t remove his trousers for any money. ’

The two men took their coffees to an empty table.

‘ You could say that again, ‘ replied the driver, ‘ I think that after all those months alone at sea he has decided to make up for a few lost opportunities. He told me once that on one of his round the world solo voyages he did not utter a word for six weeks. ‘

The driver looked up at Tom and grinned. ‘ I don’t have the nerve to tell him that every time he falls asleep in the car he chatters away like a bird. ‘

‘ Where are you taking him? ‘ Tom asked.

‘ He’s doing a trip down the coast and talking to the school children. Though I think that most of them would rather listen to somebody else. He’s not the most patient man on earth and if you don’t have the sea in your blood he isn’t too interested. He’s beginning to sound like Long John Silver when somebody gets his dander up. ‘

Early the next morning Toby decided to take a walk around the hospital. His bed was in an open ward and near enough a window through which he could see a golf course and beyond that the open beach and the ocean. There was also a small playground downstairs just outside the front door, and it was there that he was heading when he walked past a private room and heard a familiar voice ring out.

‘ No! I won’t take your the blasted pill my girl. Now heave your rig off before I blacken your sails, by thunder. ’

The boy poked his head around the door and saw a young nurse standing by the bed with a glass of water in one hand and a small white pill in the other. She was smiling bravely at the old man who had propped himself up on his elbows, who quickly noticed the boy’s face at the ward door.

‘ YOU! Deckboy. Approach the bridge, sharpish. ’ commanded the old sailor.

Tobias forgot all about playgrounds and was back in bed in fifteen seconds.

Later that day his grandfather came to see him and wish him good luck for the operation and while they were together they sat and talked quietly talked about Sir Alex, his temper, his tonsils and his voyages.

A theatre nurse came around to take his temperature and as she made a few notes on the boy’s chart the Doctor arrived to tell Tom that it was time for his boy to be prepared for his operation.

‘ He’s a strong little bloke, I don’t see anything out of the ordinary. You should have him home in about three days. ‘ The Doctor looked at the boy and gave his hair a ruffle.

‘ I hear from Father Harry that you don’t like roosters. ‘ He smiled at Tom and gestured for the nurse to wheel the bed away.

Later, as Toby was being wheeled through the wards on his way to the Operating Theatre he passed Sir Alex, who was being pushed the other way.

‘ Wait a minute,’ the old man called as they passed eachother by, ‘ I know that lad.’

The nurses backed up Toby’ trolley and the old man’s chair until they were level with eachother, then the old sailor bent forward and looked at Toby intently, his fierceness gone. He stared deep into the boys’ eyes for a long moment before he said anything.

In his own eyes could be seen fire and ice and distances beyond a boy’s reasoning.

‘ No sir. ’ Replied Toby, looking with wonder at the old face with its lines and squalls, seeing the kindness there.

‘ Fine that is for a boy it is too. Fine young lad to ship with you would be. Now you come in and see me when you are better and we will set a few red sails together eh?’

‘ Good lad, away you go then.’ and the nurses led them away from each other.

Toby awoke some time later back in his bed in the ward and saw his grandfather sitting alongside reading a newspaper; a nurse who had taken his wrist to measure his pulse had awakened him. She smiled down at the boy and he tried to talk to but no words came out of his mouth. The nurse lifted up his head so he could sip a little flat lemonade and the taste of it was so nice that Toby decided that it was always going to be his favourite drink.

Then before he remembered he wanted to talk to his grandfather he was asleep again.

The next morning Toby was wide-awake when Tom arrived and the first thing he did was suggest that they remove the bandages so he could admire his new scar.

‘ They will let you do it granddad, they said it was ok.’ Toby voiced confidently.

‘ Not just yet Tobias, it might open up and all your belly could pour out of the hole.’

Toby looked at his grandfather, horrified.

After spending a few hours with the boy before he slept Tom left the ward for the cafeteria. On his way through the groundfloor lobby he saw Sir Alex’s driver sitting in one of the visitors chairs and he walked over to say hullo and ask how the old man was going with his tonsils.

The driver looked tired and hadn’t shaved that day.

‘ Not good I’m afraid, ‘ replied the driver quietly, ‘ the old man has gone. His heart stopped during the operation and they couldn’t revive him, ‘ he looked up at Tom and shook his head sadly, ‘ He left this for your little boy before he went in, just in case.’ He held out his hand. He was holding the old sailor’s gold timepiece.

‘ He told me that your little fellow has the look of the sea about him.’

With that the driver slowly got to his feet and shook hands with Toby’s grandfather.

‘ He was pretty brave wasn’t he granddad?’

They were sitting out on the patient’s verandah in the sun with the blue Pacific not two hundred yards away. Toby was holding the timepiece to his ear.

The winter sun warmed them as they sat in a companionable silence and gazed at the panorama of ocean and sky. An observant passerby may have noticed the great similarity in both the man and the boy. In the way their eyes focused on great distances, the slow movements of their heads as they traversed the one hundred and eighty degrees of distant horizon. The reflective calm they shared that at times made words unnecessary.

‘ How do you blacken a sail granddad?’ The boy asked after a while, remembering the old man’s words.

Tom thought a moment before answering. ‘ Well, back when sailors used to stand their boats off and fight with cannon they would sometimes only load gunpowder and shot to fire at eachother’s sails. That way the sails would be blown full of holes and be burnt black from the powder, but the boat wouldn’t be damaged. They would be able to sail it away after they had captured the crew. ’

Toby imagined the chaos of cannonfire and flames, the cries of the sailors and smell of smoke and salt water.

‘ What about a red sail granddad?’

The old man looked into his boy’s eyes and saw how they looked like fractured pools of emerald crystal. The old sailor had not been wrong.

In a while he answered, ’ When ships were heading to a peaceful port, a place where their friends were, or home, they would fly a red jib on the way in. It was a sign of friendship and homecoming and those who were watching from the city walls would know who was coming in.

Toby sat silently in his chair with his eyes turned to the horizon. The warm air brushed past his young face and he could see hundreds of white gulls soaring and swooping on the distant ocean surface. He counted seven fishing boats close in shore and in the distance a couple of large coasters left long smoke trails as they ploughed the sea- lanes towards the big city ports.

When a yacht with acres of pure white sails rounded the northern point and flew with the wind down the coast.

A red jib was hoisted as it drew abreast of the hospital.

Then it was gone.