Under a blue sky and calm sea .. a walk into the city. 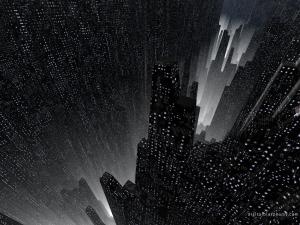 He makes a proud and slothful passage through the crowds.

Foreign woman busting out of her tight white dress. She has a coarse and masculine face, a small aggressive stature, she is a muscular walker, she is reddened with a fury, and hurrying, grim.

A barefoot dark haired smiling wine drinker, elegantly tippling from his brown bagged bottle, a dainty drunk. He casts loving looks at the booze level, checking it, picking it up ten seconds after putting it down. Taking big swallows. Legs crossed. In control.

Crewcutted fool with an idiots split toothed smile wearing a cheap silver chain wrapt around his empty head and narrow neck as he wanders and wanders about  – into peoples faces, grinning. Looking for a blow, given or taken.

Young man of thirty looking double that, leaning easily against a shop window, blanked out to the passing lunchtime throng. His heavily reddened and scabbed nose poking out of a thin bearded blackened face, likewise the shirt and trousers are shining with old smeared grime and his gaping sneakers emit a rat killing stink.

Enormously fat man nearly unconscious and lying on the ground in a city bus station vomits a thin stream of black bile all over himself and the ground around as two bored big armed uniformed policemen drag him upright and drag him away.

A quiet man seated on his boarding room bed turns to the door as someone passes by and unleashes an almighty quickfire stream of shouting incoherence, like a big dog  – this mad barking.

Frightened young spastic youth insolently soils himself in a crowded lift, smiles as everybody crowds away from his deliberate defilement.

Busker tootling on a clarinet had his salted loot lying on the pavement – the filthy blackened teatowel spread out to catch the charity had a plate sized hole in it.

A transparent emaciated and scraggy old man sitting at an outdoor cafe table in Glebe Point road is eating handfuls of biscuit pieces and breadcrumbs from a plastic bag. His bare and narrow feet poked into gaping old blackened sneakers. The crumbs litter his soiled lap.

A square and pleasant faced older man is seated alone at his table and amongst other empty tables, – he murmurs whispers and smiles confidentially at his close companion. Sometimes he chuckles.

All around him is empty air.

A young prostitute blazes away on her wet nighttime corner, igniting the pale blur of a face in every car that rubbers by in the winter rain.

A large older woman sits tiredly in a bus shelter leaning her wearied head against the shelter wall, – a young boy standing on the other side of the same wall is also leaning his tousled head against it. Their heads are only inches apart and are at the same level  – separated by one bricks width

They look to be listening to the same lost song.

A tired man is kneeling in his driveway picking up small things from the ground and putting them into a box beside him. His very small dark haired daughter, standing close, takes the opportunity to place a comforting arm on her father’s shoulder as he labours away.

There are dark angles in the bones of that worn face  – darkhaired it is with a loose mouth flopping down to take up the ringed fingers and long cigarette end.

A flick of blackeyed glance at me – small tattoos speckle a pale forearm and bangled wrist.

The fatman wears an old tweed coat that flaps like a flag as he swings his pocketed hand in and out and he strides with great confidence – clinking his change and burbling small wordgroups – and he wings his way away downtown to the Chinatown brothels.

Two young small shouldered men traipse down Victoria St. through the pale and languid groups of Saturday morning pavement coffee drinkers – One is preoccupied with his face – and his fingers yank and pull at the irritated skin that covers the the head of a putrescence boiling up out of his chin.

both wearing old shorts and muddy workboots, both carrying lunchbags

– hurrying on one close pace behind her,

A bunch faced scraggle bearded youth wearing a leather jacket sneers up at the passerby whose eyes must are distracted by the colour and texture of the dead hair that trails his unwashed scalp in a sparse faded and dirty vermilion aura.

Two men and one woman are eating at the Fishmarkets. Bovine and thick armed with coarse brutish faces only capable of staring and chewing.

They talk through their mountain of food and bottled beer.

An elderly couple wish to leave the underground carpark, she is directing and he is driving and gently colliding with all the walls as he tries to manoeuvre the big car out of the small dark space.