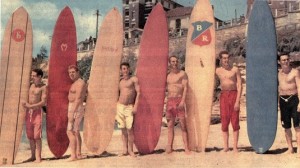 – and we stood away from the older men who made up the loosely co-ordinated membership of the boardriders club, if that was what you could call it. More a mixture of the best and worst of Sydney all collected together on the red boulders and sandy hollows of south Bondi.

Magoo with his yoga, Scott Dillon hot -mixing repairs on the promenade, and Andy C with his hand down the back of a babe’s bikini as we all watched the mayhem and destruction of ten foot waves and ten foot balsa boards in a communion of damage. Everybody fell off in those conditions, and their loose boards smashed and collided their way to the beach – a rolling logjam of splintering balsa and spearing boards – Ever watched a tourist try to stop a waterlogged balsa board with his hands as it tumbled toward him in the shorebreak – ever heard the crisp snap of a broken shin and the rendering cry of agony as the poor bastard (1) grabs his broken bone and (2) tries to avoid getting hit as the board comes back with the receding wave and (3) attempts to get back up onto his feet and (4) bravely smiles at his wife who has her own troubles with another bundle of lost logs on the next wave…… then there were the children scampering about

Those were the days …

Andy C was a fireman and he worked out of the old station in Elizabeth Street in town – not a busy workplace – and he would stand, lean, against the sandstone wall of the station house in the morning sun and purr softly at the women passing by.

Andy  with his cockade hair and comefuck grin, this shameless good-looking bastard with his easy way and how they grouped around him those beautiful girls and our envy of his seductive ways was deep and everlasting – The Lad.

Lennie Sinclair only wore glasses when he wasn’t in the water, Lennie was a born smart-arse and nothing would please me better if somehow he could read this.

We were mates, despite the Saturday nights we pulled on a blue with eachother – or against eachother – Lennies’ eyes always had that mocking flicker away in there. Hidden deep.

Somebody roll him up, let me give him a big kiss – see if he remembers the day Andy C took a double with that girl at Bondi.

We were both paddling out by the reef as Andy took off with the girl in tandem, and as he rode by with her in his arms they both came off and disappeared into the whitewater.

Are you there Lennie? Do you remember? – and more to the point, do you still have the souvenir …

We had a reunion a couple of years ago at the Bondi Diggers and Andy C came over from Hawaii for the event and although we are a generation distant from eachother and his memory of me is almost non-existant I still walked up to him and ran a hand through his pomade – thick and wet with oil as it was – waved and full bodied – greasy – and he looked at me most unkindly.

Tags: Andy Cochran, Lennie Sinclair, Magoo, out of bondi, Scott Dillon, south, Voyeurism
From: Bondi, Works
← how wimbledon ushered in the 80’s – by mike mantalos
michael kew – how he sees it →
No comments yet