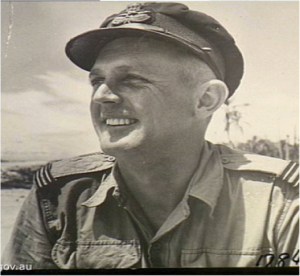 Curly.  For the fifty-five years I’ve known him he has never come as far as the kitchen without combing it. He is not a man to walk around the house with his hair undone, any hour of the day.

A little oil adds lustre. He’d always used a little oil. Vaseline Hair Tonic. His wife Marjory, my mother, told him to stop using it about ten years ago when his hair began to thin. Couldn’t stand the site of an oiled skull through the hair. Like clay refusing the favour of rain. Unnatural.

He is a man moderate in everything. A calm fellow. I have a picture of him in my study; he is leaning languid against the railing of the boat that took him off Batavia after the fall. RAAF. 453 Squadron.

Pith helmet, khakis, long socks and a poncy pair of black slip-on shoes. A slim Omega watch on his wrist. Recently one of my grandsons asked me whether this man in the photo worked in a Zoo.

I’ve been wearing the watch for the last fifteen years; it loses five minutes a day.

I rang him the other day, just to say hullo.

He was never one to talk without good reason.

‘ Old Greg Norman didn’t do too badly did he. ‘

Four hours ago I had watched Norman lose his third US Open on live TV. Leigh had had to take his car to the garage that morning and his wife Marjory, my mother, had taped the match for him. She has always persevered with the game. A small woman my mother, but indomitable and patient with all her men.

‘ I’m watching the bloody thing now! They’re at the sixteenth hole. Norman was leading and has just dropped a shot! Now you’ve given me the bloody result! ‘

Leigh is a golfer, has always been. Seventy years on the fairways and still a formidable competitor. His eyes are bad now and his opponents have to show him his flight and lie. For this he thanks them unfailingly and then beats them cruelly.

I once walked through the hallways of his club, paneled as they are with the oak shields that list their champions, and thistled throughout them all is the name of my father. A generational winner.  His brother Col features pretty heavily as well.

‘ Not even a rusted putter to remember you by? ‘

We had a gas leak once, down in the garden by the roses where the meter was boxed up in an asbestos shelter. Leigh dug a hole all around the pipes to expose the leak and by the time he had finished it was late afternoon. Darkish, hard to see. I took down the candle and matches he had requested. Mother and my sister were watching from the top step. Thanks for the warning. PHWOOOOFF!!!

That was thirty-five years ago but to hear Marjory, my mother, tell it – amidst her great gusts of laughter – is to be refreshed. We always laughed, and at eachother.

‘ What can I do to get back into the good books? ‘

‘ Stay away from me for the next ten years! ‘

He was enjoying this, his voice was strong and the replies were coming reflexively.

‘ I thought I had put in fifty-five pretty fair years with you up to now. ‘

‘ Maybe! But now you’ve buggered it and for good! ‘

‘ I might as well ring  Col then, at least I’ll get a better reception there. ‘

Col is my father’s brother, younger brother.  He’s a red-faced man with sun cancer problems. He has a good voice, one that you remember from the very early days. Both brothers are the handicappers at The Tattersalls Swimming Club and are tight with their favours.

Leigh used always win the Father’s race at my old schools’ annual swimming competitions. He taught me how to body surf but he never let me join the Surf Club.

But that’s another story.

I rang off and later that day rang again. Marjory answered.

‘ The tape he was watching; it ran out on the seventeenth hole. He never saw the end of the game. ‘

My mother once unknowingly put gravy onto Dad’s ice cream and when he was made aware of it she suggested that he cease his complaining and eat it anyway. Mum likes to stay sitting after dinner and this was after a few whiskies on a Saturday night. Always the best night to be home. We would watch South Sydney win every week on TV.  Clive Churchill and Mike Cleary. Ian Moir and Dennis Pittard.

My sister Judy would spend the entire one and a half hours of the match getting ready to be taken out by older youths who, when they arrived, never failed to exert their superiority over me.  Oafish fellows generally, with their perfumed and waved hair: they bowed and nodded at my fathers’ words and thought it amusing to twist my limbs.

I met one a year or two ago and thought he looked a little shrunken, bald and worn down. When we shook hands I took a little interest on the loan outstanding. And our eyes held for just a moment before sliding away, each in displacement.

Judy used to bring her girlfriends from school to stay weekends from time to time; they were a few years older and would use me to practice their wiles. One night they all dressed up in earrings, sheets and baskets, and they danced past me as I sat listening to the radio in the living room.

One of the girls accidentally let the basket that hid her breasts slip and at that instant she looked into my eyes.

She never came back, not that I remember.

My sister has a photo of her somewhere but the look she gave the camera is not at all like the one she gave me.

My brother Tony, Tobes – a big lad who looks Greek, inexplicably  – was over one Christmas and in an idle moment one afternoon walked out into the back yard and picked up Dad’s gardening fork. It was stuck into a pot that hadn’t supported plant life in over twenty years. Two of the three prongs were rusted off, the wooden handle gone a dozen years ago. Tony waved it through the window at us and then walked around to the outside toilet where Dad leant up his rakes and brooms. The broom handle came away from the broom head when he picked it up. The broom head lay there orphaned, its blonde and atrophied bristles center parted by the pressure of a generation of gravity. Like a school prefect’s haircut. Those bastards.

But that’s another story.

The rake irons were like narrow blackened teeth widened by periondititus, or gingivitis. Rotten anyway. We snapped them off one by one Tony and I. Threw them into the hydrangeas to turn the flowers blue. Told Dad through he window that we were doing him a favour.

Mum came out all laughing tears and quaking ribs.

Isn’t joy a wonder to behold?

Dad got up out of his chair, came outside and pretended to be pissed off with the now uproarious proceedings. We all laughed the harder as he joined us, half smiling, as he does best.

Someone took a few photos.  Tony and I had our arms around him. A father is a good man to touch, to squeeze. In one of the photos I have my hand in his pocket. I’ve always been one for errant symbolism.

Then we put everything back. Even in nature a fallen tree has its place.

My younger brother has always had a different relationship with our father compared to the one I have. This became obvious when, as an assured boy of eight, he began to call Dad by his known name. Leigh. Or Freddy, his first name. Frederick Leigh Bowes. Freddy!

Last Christmas Mum bought Dad a new gardening fork at Franklin’s for four dollars fifty. She tells me that he has put it away  somewhere, always a one for hidden reserves is my father.

Leigh polishes his clubs every week. He practices his swing in the bedroom regularly. With a seven iron. Clips the shredded top of the pile a hundred times and in the doing just misses the ceiling light, the dresser and the wardrobe. I used to go in and sit on his bed and talk to him, try to put him off his stroke. He had taught me how to compete, and in dead earnest.

‘ What if I tell you he got a couple of Albatrosses on the last two holes. ‘

I rang him back today.

‘ All the better for having you aboard mate. How’s Mum? ‘